Almost a month has passed since I ran my second half-marathon, so I figured it was time to take a closer look at my two races.

I signed up for NW1/2M on a whim, to be perfectly honest. A week after my thirty-wonder-first birthday, I got an invite as a regular Nike+ user to sign up. I had been running since December the previous year, but I had never properly trained for a race of any kind, let alone an endurace race like a half-marathon. The energy at the race was intense, but I am certain that is how anyone feels when they take on their first race. 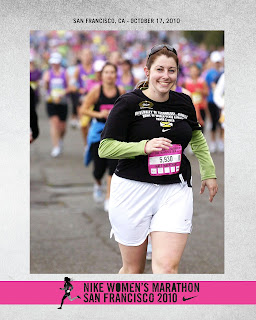 Race: Nike Women's Half-Marathon (Bib #5930)
Date: October 17, 2010
Overall Time: 3:05:44
Average Pace: 14'10"
Splits:
No sooner did I get home from San Fran, my cousin, Kathryn, "made the call" and invited me to run the Princess Half with her. I was thrilled that she asked me because I am always looking for people to race with, especially if I can share it with the people in my life. 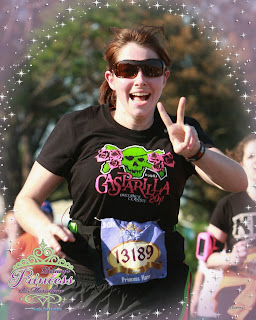 Race: Disney Princess Half-Marathon (Bib #13189)
Date: February 27, 2011
Overall Time: 2:52:09
Average Pace: 14'10"
Splits:
What puzzles me is that I thought I had started off stronger at Disney then I did at SF. I remember charging out of the gate in San Fran, through the dark, vacant streets, but feeling like I tired out and walked much more during that race. Also, the hills from miles 6-9 were torture on my knees and ankles. Aside from the last two miserable miles in the rain, all my times in SF were better than Disney. I wonder why... I took a quicker bathroom break, and walked much less in Florida.

Curious. Perhaps I made better time after clearing the 15K mark as it was Florida sunshine and blue skies all over Disney. I stopped for fewer photo opportunties as well. In 2010, I was 165 pounds, but when I ran in February, I dropped fifteen pounds.
Posted by Kahrenheit at 3/27/2011 06:27:00 AM

Email ThisBlogThis!Share to TwitterShare to FacebookShare to Pinterest
Labels: Before and After, Disney Princess Half-Marathon, NWM 2010, Race Comparison, Running Splits