So, I finally laced up and showed up. Saturday morning, I made my Nike+ Westchester Run Debut. After nearly two years of lingering around the Nike Westchester Store, buying my gear, collecting the promo cards, and following the group feed on FB, I just did it. I showed up and ran it out. Waiting outside, it felt like the first day of school. I was the new kid showing up and I felt a little awkward. Thankfully, that subsided quickly as the staff provided a warm greeting, LunaBars (love 'em), and release forms. As the usual suspects made their way in, I started kicking myself for not showing up sooner. Everyone was so nice and their accomplishments were varied, but equally amazing. 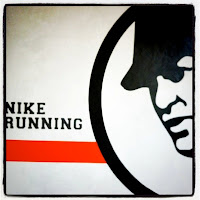 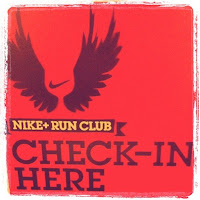 The obligatory self-introductions went around, and despite being around marathoners and triatheletes, I wasn't intimidated like I thought I would. One person ran NYC Marathon. Another ran Chicago. One's training for Boston. Yet, my recent finish at the Disney Princess Half wasn't over looked. One of the runners, a mom, was very curious about my race and we started talking. It was satisfying to tell another runner about a race they had never heard about or run (and not bore them to death about it)!

We set out from the Westchester Mall and ran along North Broadway. When they said we were running to the station and back, I didn't realize they mean North White Plains Station. The college student (and Nike Employee) who was my pacer, was also debuting at RC. He was kind enough to linger near the back of the pack with me while all the seasoned veterans tore off ahead. I didn't mind though, I'm just learning the ropes. It was nice to see a familiar road from a new perspective. Usually, I drive down North Broadway when using the highway to access White Plains, so I learned tha tnice, flat route, actually is full of uneven, cracked sidewalks and some hills near the cemetary.

﻿﻿﻿﻿﻿﻿﻿﻿﻿﻿On our way back, we passed a house which gave a massive whiff of bacon. My pace buddy and I nearly threw in the towel and headed up the sidewalk because it smelled that good (much better than my cinnamon raisin bagel this morning). I elected not to run the extra half-mile as we returned toward the mall. Friday night, I played volleyball with the studdents and had my ego handed to me by a group a teenagers. Returning to the store, high-fives, fresh water, and more LunaBars awaited. People trickled back in and we chilled out on the benches in the middle of the store. It felt like hanging out at someone's house, not in the mall. I think this gives a whole new meaning to mall rat, but much classier. Mall rodent, anyone?
﻿﻿

We clocked our data on the log sheets, refueled, and enjoyed talking. After a 3.5 mile run outside in the high 30-something degree weather, the mall felt disgustingly hot. Thankfully, after my body temperature dropped back to normal, it was more comfortable. We took a group photo together, and before I left there was a bruhaha about "green laces" for one of the Nike+ users who is training for the Bronx Half in August. Turns out, with RC you can get colored laces when you change level on Nike+! When asked what my level was, our group leader came back with a pair of bright green laces just for me! I was told to come back and make sure I pick up my blue ones once I advance to the next level (about 93 miles from now). Overall, I hate myself not not joining up sooner, but grateful that I finally did! In the infamous words of Arnie in The Terminator, "I'll be back."
{the RUNdown}
What: Nike Westchester Run Club
When: from 9AM
Where: Westchester Mall, White Plains, NY (3-7 Miles)
Notes: They recently started a Wednesday Night Run Club, but I won't be able to participate in that until July when I get back from the UK, and then it'll just be for the summer months as Wednesdays are the one night a week I cannot get off work. Hopefully once the fall term starts again and my routine returns to normal, I can make it on the weekends I am not on duty or out somewhere running.
Posted by Kahrenheit at 3/15/2011 06:15:00 AM