[22] Addition to the Pantheon

Oh, Shalane Flanagan. Girl, you can run. Call me a bandwagon jumper, I don't care. Despite representing the US in the 2008 Beijing Olympic Games, I had no idea who the Bronze Medalist was until she graced the cover of Runner's World Magazine (Back Story, November 2011) prior to her debut at the 2010 ING New York City Marathon. Even then, I had just started reading RW and glanced over her article with mild interest. I think this was largely in part to her being on the cover, but her article being tucked somewhere near the back of the magazine. Though I participated in the Continental Airlines International Friendship Run on the day before NYC 2010, I sipped my morning coffee and watched the race from the comfort of my living room the following morning.

While I waited for the race to begin, I flicked through my RW magazines, and realized that Shalane was hanging out on my coffee table and gearing up on my TV simultaneously. So I watched with rapt attention and tracked her split times on my iPhone using the 2010 ING NYC Marathon iPhone App ($3.99). The excitement of watching the race eclipsed the fact that I was lounging slothfully on my couch in my pajamas while the masses were either hitting the highways of the five boroughs and cheering the runners on. I felt guilty for about thirty seconds, then I opened a window to get some fresh air... and promptly closed it again. Let's just say my non-denominational guilt was gone with the November wind.

Watching NYC for the first time was an informative experience. Both the men's and women's divisions were outstanding, and the commentary provided was rather educational. Being a novice runner, there was unfamiliar jargon, but being alone on my couch meant I could yank up definitions on my laptop without being crucified by more seasoned veterans. Even now, I am still learning names of injuries, prevention and training methods, and I can't name most of the elite runners out there, but I am perfectly okay with that. Of course, with the women's division, I found it amusing that the commentators analyzed Shalane's choice of apparel for her debut. They liked the selection of a fuller bottom lycra short, knee-high compression socks, sleeves,  gloves, and the high ponytail. It was a "classic throwback". Shalane was the belle of the ball-- Cinderella, but much, much faster. Hey Disney, if you want to do another Annie Lebovitz "Dream Portraits" Series, pick Shalane as your Cinderella. Try inviting her to run in the next Disney Princess Half-Marathon (or any of the ESPN Endurance Races).

One more reason for me to love Lady Shalane, is that she trains at the Nike Campus in Beaverton, Oregon. Like I need another reason to give Nike more of my money. I hope she qualifies for the 2012 London Olympics, so I can cheer for her from my couch again. As for 2011 NYC, if she runs it again this year, I may be tempted to hang around in one of the boroughs and see if I can catch a glimpse of her! If I can make it into 2012 NYC, I hope she is there. 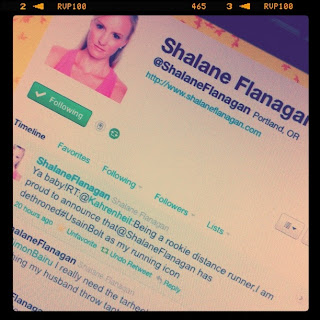 P.S. While I was the Starbies, I discovered that Shalane is a Tweeter. I thought it was a rather long shot to tweet some praise, but when I woke up this morning, I found this little surprise! Perhaps telling one Olympic athlete that they've replaced another helped. ;)  I have been Re-Tweeted! <3 This makes for a very happy morning!

Read up on Shalane: