[Race Packet Pick-up]
I am not a big fan of crowds, but thankfully, NYRR has the pick-up system down pat. They make the system simple, fast, and most importantly painless. Granted, I dropped by at 1:45PM on Thursday, and pick-up only started 45 minutes prior. Same format as the Japan Run, in the doors, up the stairs, get the bib (with pins and B-tag clip), and then back down stairs for the freebie t-shirt and back out side. Luckily, there was no crowd and I was in and out in less than five minutes.
I was excited to see my placement in the purple corral (remembering it was the one before mine in the last race), but I would later find out that it was the last corral as the race didn't sell out this time. 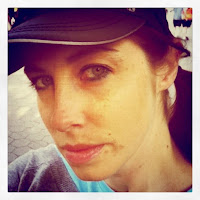 I'm going to take a time out here and rave about two items: the shorts and the visor. I've been running and primarily using my Nike Tempo shorts since SF in 2010. This was the first race I ran with the Mustang short, and I loved it. The crepe material was light and airy, and the zippered side pocket was great for my ID (had I brought it), cash, and my iPhone. It comes with a built-in panty which breathes really well.
As for the visor, it is made of the same 'swift' material that is used for their running shorts and skirts. It is super lightweight, breathes really well, and the brim of the visor has a built-in reflective strip. Why this item is on 'FINAL SALE', I honestly don't understand. It is a practical, technical piece which is easy to maintain (hand wash, air dry) and has a simple design. The colored version have a ruching design for the band, but I am not really a fan of those (plus, black is more versatile with my wardrobe). I wish they would bring it out in white, gray, or colors which aren't tie-dyed.


[Race]
I was better rested, hydrated, and felt great. It was a cooler morning, so I left the house with a couple of extra layers on, but shed them at the park. The bag drop was opposite the band shell this time (I really need to become better acquainted with the layout of CP), so I dropped of my bag, and snacked on a LaraBar while I moseyed around prior to the race. Stopped by the start line and snapped a few photos before heading to my corral.
There were lots of teens, 'tweens, and kids this time around. There was no scheduled kids race, so I am guessing volunteers with the Team for Kids groups partnered up to mentor young runners (which is awesome). My concerns with children running in a race dominated by adults is their safety as well as that of other runners. Some of the pacers for the children would job ahead and expect the kids to catch up, while others would maintain their pace and let the kids run ahead. They may be smaller, but if they are unaware of certain courtesies such as stepping to the side if they are tired, not turning around to look for their pacer/teammates, or annoucing their passing when they're trying to squeeze  by a larger group, many may see them as a nuisance. Personally, I had a young girl running in front of me, but then she abruptly stopped to turn around and call to her friend. I almost body checked her, and she looked at me as if I were crazy. No Dear, you need to be aware of what you are doing so as not to injure yourself or other runners. It's not the other way around.

I took off my headphones midrun because I wanted to take in the sights and sounds of Central Park. The morning cool  burned off as the sun cleared the buildings, but all that leafy goodness in the park provided tons of shade to run under. For some reason, without the distraction of music and slipping into my own little world, I was spotting running peeves left and right. 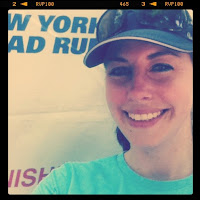 [Japan Run Revisited]
Second Verse. Same as the First. I was hoping that my splits and overall time would improve over the last month, but being slack in training certainly shot that horse. The course was a mirror image of the Japan Run, and overall, I think I shaved off seven seconds. I felt better, but looking at my times, it felt rather anti-climatic. My next shot at this course will be the Central Park Conservancy Run for Central Park on July 16th. With three races between Celebrate Israel and Run for CP, I am hoping that my speed, stamina, and endurance will improve a bit.
[2012 NYC Marathon 9+1 Progress]
Race 2/9 is officially in the books. Tuesday night, my NYRR race history will be updated. The rest of this month is about focusing on my runs in Scotland and Ireland, but this challenge will resume in July with three races on the menu: Boomer's Cystic Fibrosis Run to Breathe 10K, the CP Conservancy Run, and the Queens Half-Marathon.
Posted by Kahrenheit at 6/05/2011 12:19:00 PM