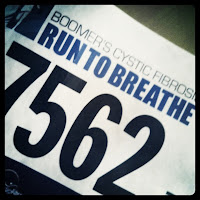 [Event Atmosphere/Race Packet Pickup]
This time around, my race buddy, Jen, picked up my packet,  as she was in the City and I was trapped behind my desk. It was the first time someone else picked up my packet for me, but it according to her, it was a very painless process.

[Race]
This was my first 10K race, and as I expected, I was unprepared for it. Prior to the race, training was minimal in the days after returning from my European vacation. My current PB for this distance was 1:10:20, but most likely it comes from one of my two half-marathon attempts.  I pushed hard, but with the heat and humidity (and a lack of training), I wasn't able to shake it up enough. 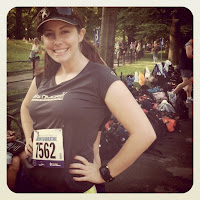 Jen and I started out in the corral together, but shortly after we cleared the first 1/2 mile, I waved her off. Though I was thrilled to run a race with a friend, Jen's been running for a much longer time (including marathons), so I was under no illusions that I'd be able to pace her. From the get go we had the standing agreement to start together, split up when necessary and meet up in the Finishers' Area.

The Run to Breathe is very aptly named. The race benefits the Boomer Esiason Foundation, but with the heat and humidity of July, everyone's struggling to breathe in the sauna that Central Park becomes. It was my first time to run the entire length ("the big loop") of CP, and all things considered, it wasn't as bad as I thought. It wasn't great, but it was much easier than I originally thought. I just need to take it easy.

Though our time in the race together was relatively short, I really enjoyed our train ride, our stroll through the park, and going to victory breakfast and window shopping after the race.
[Playlist]
I did this on my race in Ireland, and I really liked the outcome. Using my iPhone, I just picked a track I like and used the Genius function to generate a playlist. I did learn that I need to update my iTunes library as with incomplete data, it limits selection greatly.

“Say My Name” by Destiny's Child
[2012 NYC Marathon 9+1 Progress]
A third of the way there! Next up is the Central Park Conservancy’s Run for Central Park next Saturday. The city’s heating up, so I have to remember not to push so hard and realize that times will just be slower in the summer time.
Posted by Kahrenheit at 7/09/2011 07:09:00 AM