[55] SportWatch Where You Are Going 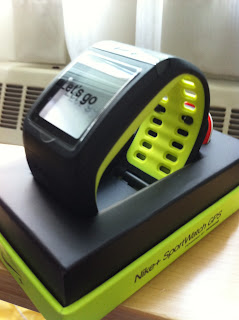 Nike teased me with images of their next generation SportWatch+ GPS by TomTom in January with an anticipated launch date of April. April came and went and there wasn't a place I could get my sweaty mits on one. May zipped by and still remained empty handed, but some how in early June as I was preparing for my trip to the UK, I lucked out when I visited Westchester Road Runners for the first time in what felt like eternity. After walking into half of the Nike Stores in NYC only to find floor models and no available stock, I did a double take as I pressed my nose against the glass.

If I remember correctly, I had quite the Homer Simpson donut moment (possibly complete with drooling). It felt too good to be true, but I couldn't be responsible for my actions had the small stack of boxes been empty. Not only were the items in stock, but I got my 10% discount for being a member of NYRR!*

No sooner did I get home did I plug it in and start messing around with everything. I wore it to the staff BBQ and my friend and colleague who is a triathlete took one look at it and told his wife that he wanted one, too! Knowing that I wouldn't be able to use the Nike+GPS App while on my vacation in the UK and Ireland, I was relieved to have something that could track my trip races. Unfortunately, ran into a snag in Scotland and the GPS didn't register. Weeks later, and I am still fighting with Nike Maps to record the distance accurately. Luckily, everything cooperated for the longer race in Enniscorthy.

I've discovered that when I am on the treadmill, I don't mind using the iPhone apps as the majority of the critical information I desire is listed on the screen or narrated to me. While running a race, I can't be fussed to fidget with my phone too much as running the apps kills my battery quickly (and I like having my phone available in the event of an emergency). So as to avoid getting the arm band tan, I like keeping my iPod/iPhone in my pocket while running. Checking stats this way can be quite the challenge (and not in a good way).

Despite the full figure, I have rather skinny wrists, and initially the weight and heft of the SportWatch felt awkward and didn't fasten as snugly as my beloved SportBand. Also, when adjusting the band, I keep pinching my arm with the hinge and clasp. I do like how it snaps securely in place with two catches, but removal isn't nearly as switch and easy as the SportBand. I like the illuminated screen and the access to additional fun information like run history and personal records. 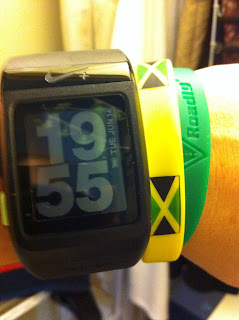 The only issue I had since obtaining the SportWatch was linking the WearLink+ Heart Rate Monitor to it. I will fess up and admit this time around that it was user error as the battery in my HRM sensor was flat out dead. All it took was a quick trip to the store and a new battery. Too bad I wasn't able to figure that out back in June when I was packing for my trip and getting increasingly angry at the growing pile of run tech on my desk. I have to rotate my SportBand and my Baby-G Shock watch into my fashion rotation.

Compared with other GPS watches, its rather compact and slim, but sometimes I may elect for my SportBand out of nostalgia. I will miss having the option for the interchangeable Bands. I haven't changed my SportBand since I received the RunNYC2010 one at the Nike Concierge at the NYC Marathon Expo. Whenever I look at it, I remember standing in the Expo and saying to myself, one day I'll run NYC like the rest of them.