This run was a light, friendly event on the weekend of the 2010 ING New York City Marathon. With so many international marathon runners and participants from around the globe, this event really showcased that New York is "where the world comes to run". Although people ran in yukata, lederhosen, or even patriotic bras, it atmosphere was all about having fun.

The event started at the United Nations Plaza (First Avenue & 44th Street). Turning onto 42nd Street, all I could see where a sea of runners and not a single car in sight. Running past Grand Central Terminal at 9:15 on a Saturday morning, was an incredible feeling. Hanging a right at Sixth Aveue and running side by side with people from various countries gave a whole new meaning to "Avenue of the Americas". It was so cool to run past Bryant Park, Rockefellar Center, and and Radio City Music Hall! I never noticed that I could see Central Park from 42nd Street, as I don't make it a habit to stand in the middle of any road in NYC longer than necessary. At the foot of Central Park, I hung a left and made it for Columbus Circle.

Columbus Circle is the last stretch of the NY Marathon, so the spectator section was full of bleachers. My colleague showed up and made my a cheering sign! I was so stoked that she braved the cold to be there. Unfortunately, I wasn't able to catch up with her afterward. The finish line is just short of the NY Marathon Official Finish Line. I may never run the NY Marathon, but I will definitely love to do this again! [Course Map] 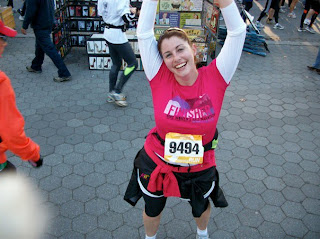 Next year, I am going to have to play up the American Pride. It was neat to see so many costumes and flags!
Though I didn't participate in the NYC Marathon, I did buy two treats for myself in honor of the race weekend. I was dazzles by the massive size of the Asics Marathon Shop at the Expo. I picked up a racing shirt that said "I Run These Streets" in Lemon Drop (the name alone perks me up) and some awesome Marathon 5 Boroughs Gloves (each digit has one of the five borough names). Also, I stopped by the Nike+ Concierge and the staff members gave me a RUN NYC 2010 replacement SportBand for being a loyal Nike+ User. I was so happy to be able to change out my worn band.
Posted by Kahrenheit at 11/06/2010 09:00:00 PM